Anyone heading for Alaska will be bound to be aware of the state’s propensity to wide open spaces and with such formidable landscapes comes an inevitable amount of animals.

Many tours to Alaska are based entirely around wildlife watching with whales and grizzly bears considered to be just a couple of the ‘must sees’ whilst your heading north of the border.

Below are my top ten animals that are indigenous to the wilds of Alaska and if you’re hoping to catch a glimpse then keeping quiet, following ranger instructions and taking binoculars is always best advice. 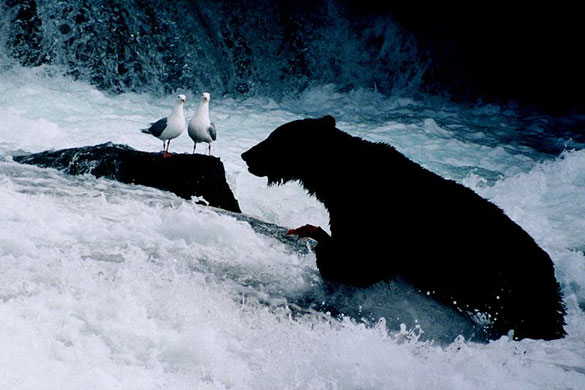 One of the most formidable and sought after bears in Alaska has to be the brown bear of which around three quarters are considered to be grizzlies. Extremely large and definitely not to be approached, these creatures can be found in abundance if you know where to look but are certainly better observed at a safe distance, preferably on the other side of a large lake.

These chaps are much smaller than their brown relatives and tend to inhabit the mainland of Alaska steering clear of the surrounding islands. Known to be pretty relaxed around humans, black bears are commonly considered to be an absolute pest as they’re happy to trawl threw rubbish bins and destroy a campsite in their unflinching quest for food of any nature.

Often difficult to spot thanks to an instinctive desire to hide from larger predators, the Alaska Marmot is known to inhabit ridge areas where they hibernate as a colony from the autumn through to the spring. Once the thaw sets in marmots will make the most of the meadow grass, shooting plants and moist moss which is just as well as this type of vegetation tends to thrive in Alaska.

Very tricky to capture on film as wolverines prefer to reside in complete wilderness areas within mainland Alaska where humans tend not to tread. Considered to be a wily critter, wolverines walk a fine line between predator and scavenger and have been known to take down a moose if there’s nothing else on offer. Clever, fierce but ultimately shy, the wolverine is a local legend and rarely seen.

Now, here’s an animal in Alaska that you’re bound to see as sometimes these docile deer-like beasts have been known to venture into rural townships without a care in the world. In the main, caribou tend to stay to areas where there are few trees but lots shrubs, grass and moss so if you’re heading to mountain tundra zones you’ll be sure to catch a glimpse of what’s estimated to be around one million inhabitants.

Hunted to close on extinction due to their fine fur and curious nature, sea otters have since become a protected species which is great news for anyone visiting Alaska in the near future. These days sea otters can be found in their thousands and following a guided tour along the coast or journeying by boat to any of the surrounding islands will bring you into closer contact with this lithe and beautiful beast.

If you get to see a lynx whilst on holiday in Alaska then you’ll probably be out at night and if you are on a nocturnal exploration then best advice is to wrap up warm and take lots of care. Basically, these stealthy predators rely on smaller mammals such as snow hares for the majority of their food and if there’s an abundance of hares in the area then the same can be said for the lynx.

These snow loving creatures tend to stick to the coastal areas and aren’t big fans of trees. During the summer Arctic foxes switch coats from white to brown which makes them something of a chameleon and often confused with the more common red fox. Once hunted for their fur, especially by natives to Alaska, this is rarely the case these days and as such the population is once again starting to grow.

This is one of Alaska’s top predators and 2 types (Mackenzie Valley and Arctic) are indigenous to the area. The further south you go the smaller the wolves become and if you’re travelling on the mainland in the north of the state you may get a rather large surprise if you happen to be downwind around dusk. It’s thought that there’s one wolf to every 25sq miles of land so keep your eyes peeled and listen to that howl around midnight.

The largest indigenous seal type to be found in Alaska, the bearded seal is well-known for its love of icy waters where it can be found doing its best hunting. Migratory patterns follow the icy ocean northwards in search of food and the further they travel during the winter months the much less likely they are to be found in any great numbers. Summertime means a much greater concentration of bearded seals and a much better chance of spotting a colony lolling about on the shore.

Chris is an absolute animal lover and can’t wait to visit Alaska to encounter all manner of wildlife both on the ocean and on the mainland.

Our Journey to owning a house in Spain