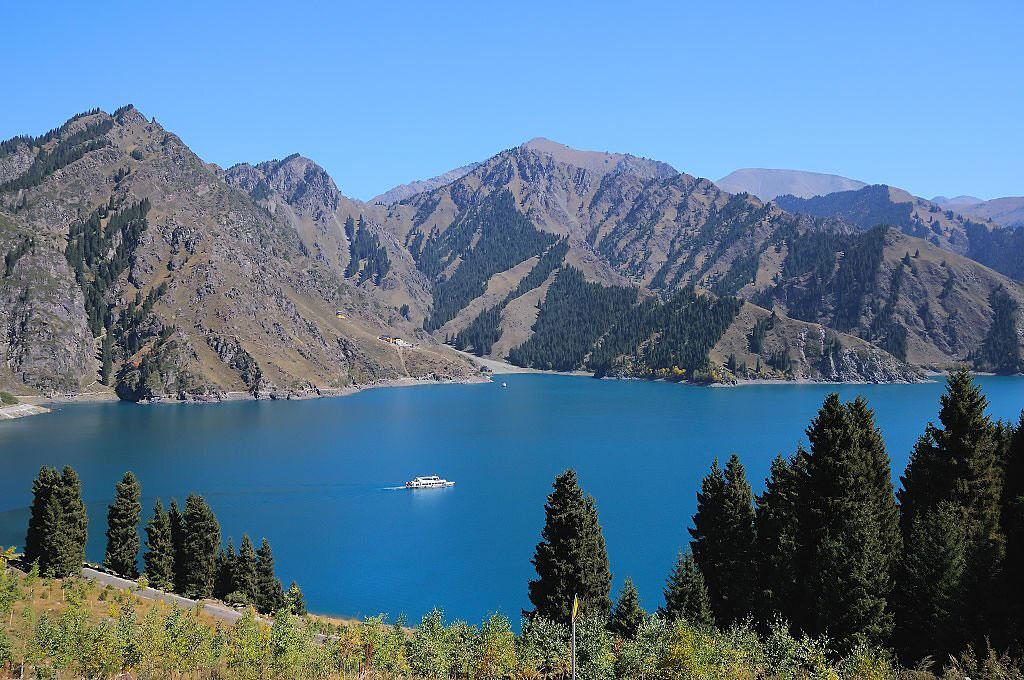 Niangniang Mountain is located southwest of Qiaotou Town, Datong County. Legend has it that Jin’e, a beloved concubine of Emperor Yangdi of the Sui Dynasty (581-618), was buried there after her death. The emperor granted the mountain the title of “Sacred Mother of the Golden Mountain”. Major attractions there include the Imperial Banquet Terrace, the ruins of a temple dedicated to Imperial Consort Jin’e and Tianchi Lake at the top of the mountain. “Sunrise at Jin’e Mountain” is one of the eight most famous ancient views of Xining.

Tianchi is an alpine lake in Xinjiang, Northwest China. The name literally means Heavenly Lake and can refer to several lakes in mainland China and Taiwan. This Tianchi lies on the north side of the Bogda Shan range of the Tian Shan (“Mountain of Heaven”), about 30 kilometers (19 mi) south of Fukang and 45 kilometers (28 mi) east (straight-line distance) of Ürümqi. It is an alpine drift lake shaped in the Quaternary Glacier period.

Formerly known as Yaochi (“Jade Lake”), it was named Tianchi in 1783 by Mingliang, the Qing Commander of Urumqi Command.

Transport: Take a bus at the Xining Railway Station or the South Liuyiqiao Bus Station to Qiaotou Town, Datong County.

Hope you enjoyed reading about “Niangniang Mountain Sacred Mother of the Golden Mountain”. Please do share your thought in the comment section below.