The Algarve region, at the southwestern most corner of Europe, is the nation’s foremost resort destination. Its coast stretches 160km (100 miles)—all the way from Henry the Navigator’s Cape St. Vincent to the border town of Vila Real de Santo António. The varied shore contains sluggish estuaries, sheltered lagoons, low-lying areas where the cluck of the marsh hen can be heard, long sandy spits, and promontories jutting into the white capped ocean. Called Al-Gharb by the Moors, the land south of the serras (hills) of Monchique and Caldeirão remains a spectacular anomaly that seems more like a transplanted section of North Africa. Inland, nudging the heavily developed shore, the countryside is heavily cultivated with groves of almonds, lemons, oranges, carobs, pomegranates, and figs. 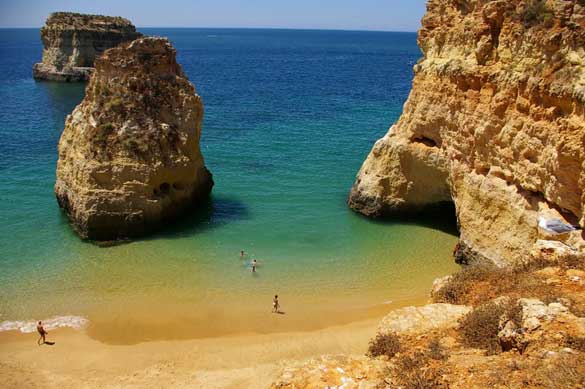 Phoenicians, Greeks, Romans, Visigoths, Moors, and Christians all touched this land. A distinct Arabic flavor prevails in the region’s fretwork chimneys, mosque like cupolas, and whitewashed houses, and some Moorish and even Roman ruins remain. However, much of the historic flavor is gone forever, swallowed by the swarms of dreary high-rise apartment blocks surrounding most towns. Many former fishing villages, now summer resorts, dot the Algarvian coast: Carvoeiro, Albufeira, Olhão, and Portimão. The Atlantic and nearby Mediterranean remain primary sources of life, as they always have been. The marketplaces in the villages sell mats made of esparto (a long, coarse grass), copper work, pottery, and almond and fig sweets that are some- times shaped like birds and fish.

Lagos and Faro make logical home bases, with ample lodging choices, railroad and air connections with Lisbon, and an easy driving range to all the likely destinations along the coast.

strong>Algarve beaches : All you need to know

Many beaches fringe the peninsula; some attract nude bathers. Mareta, at the bottom of the road leading from the center of town toward the water, is the best and most popular. East of town is Tonel, also a good sandy beach. The beaches west of town, Praia de Baleeira and Praia de Martinhal, are better for windsurfing than for swimming.

En route to Praia da Rocha, off N-125 between Lagos and Portimão, 18km (11 miles) away, you’ll find several good beaches and rocky coves, particularly at Praia dos Três Irmãos and Alvor. But the most popular seaside resort on the Algarve is the creamy yellow beach of Praia da Rocha. At the outbreak of World War II there were only two small hotels on the Red Coast, but nowadays Praia da Rocha is booming, as many have been enchanted by the spell cast by its shoreline and climate.

The area is named Praia da Rocha, the “Beach of the Rock,” because of its sculptural rock formations. At the end of the mussel-encrusted cliff, where the Arcade flows into the sea, are the ruins of the Fort of St. Catarina, whose location offers many views of Ferragudo (the village adjacent to Portimão) and of the bay.

To reach Praia da Rocha from Portimão, you can catch a bus for the 2.5km (11⁄2- mile) trip south. Service is frequent. Algarve buses aren’t numbered but are marked by their final destination, such as PRAIA DA ROCHA.

You can visit Praia dos Três Irmãos (Beach of the Three Brothers) for its beach, even if you prefer not to stay overnight. It’s just a 5km (3-mile) drive southwest of Portimão, or you can reach it (or the tourist development at Alvor) by bus. Service is frequent throughout the day. At Praia dos Três Irmãos, you’ll find 14km (82⁄3 miles) of golden sand, broken only by an occasional crag riddled with arched passages. Snorkelers and scuba divers have discovered this beach and enjoy exploring its undersea grottoes and shore-side cave.

Praia dos Três Irmãos’s neighbor is the whitewashed fishing village of Alvor, where Portuguese and Moorish arts and traditions have mingled since the Arabs gave up their 500 years of occupation. Alvor was a favorite coastal haunt of João II. The summer hordes descend on the long strip of sandy beach here. It’s not the best beach in the area, but at least you’ll have ample space.

This cliff-side town, formerly a fishing village, is the St-Tropez of the Algarve. The lazy life, sunshine, and beaches make it a haven for young people and artists, although the old-timers still regard the invasion that began in the late 1960s with some ambivalence. Some residents open the doors of their cottages to those seeking a place to stay. Travelers with less money often sleep in tents.

The big, bustling resort has the characteristics of a North African seaside community. Its streets are steep, and villas are staggered up and down the hillside. Albufeira rises above a sickle-shaped beach that shines in the sunlight. A rocky, grotto-filled bluff separates the strip used by the sunbathers from the working beach, where brightly painted fishing boats are drawn up on the sand. Beach access is through a pas- sageway tunneled through the rock.

Twenty years after the Marquês de Pombal rebuilt Lisbon, which had been destroyed in the great 1755 earthquake, he sent architects and builders to Vila Real de Santo António. They reestablished this frontier town on the bank opposite Spain in only 5 months. Pombal’s motivation was jealousy of Spain. Much has changed, but Praça de Pombal remains. An obelisk stands in the center of the square, which is paved with inlays of black-and-white tiles radiating like sun rays and is filled with orange trees. Separated from its Iberian neighbor by the Guadiana River, Vila Real de Santo António has car-ferry service between Portugal and Ayamonte, Spain.

Today, Vila Real is a mostly residential and industrial community that prides itself on its royal and antique associations as a border town. Southeast of Vila Real is Monte Gordo, a town whose buildings mostly date from the 1920s and later. Set 3km (13⁄4 miles) to the east, it’s the site of most of the region’s tourist facilities and hotels, with easier access to the sandy beaches that attract tourists every summer from as far away as northern Europe.

My name is Bispo and I live in Portugal.I really love my country and specially Algarve

Experiencing Nan Of Thailand For Once In A Lifetime Experiences!

Off The Beaten Track – The World’s Most Secluded Beaches