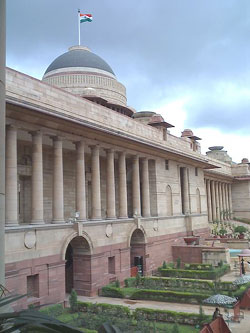 Rashtrapati Bhawan: This is the official residence of the President of India. This palatial building with a large court and a sprawling garden is located at the top of the Raisina Hill. The area of the Rashtrapati Bhawan is approximately 330 acres. Designed by Sir Edwin Lutyens, it has 340 rooms, 74 verandahs, 37 conference halls, about a kilometer-long gallery, 18 sowpan marg or flights of stairs, 227 pillars and 37 fountains. Most of the rooms of the Darbar hall are located under the main tower. It was constructed as the viceroy’s residence during the British rule in India. The first occupant of this impressive building was Lord Irwin. The porticos and pillars as well as the Ashoka Hall and the Durbar Hall and are an architect’s marvel. The sprawling Mughal Garden is situated at the rear side of the Rashtrapati Bhawan. It is opened for the public for a few days in February when the seasonal flowers are in full bloom.

The President’s bodyguard changes guard every Saturday morning (from 8:30 am to 9:15 am in summer as well as from10:30 am to 11:10 am in winter). This formal procedure is deemed as Delhi’s answer to London’s Change of the Guard ceremony. The public can see this remarkable march-past from outside the gate of this tourist’s delight. All functions and meetings of the President of India are held in the Rashtrapati Bhawan.

The Varying Degrees Of Fun In Alaska