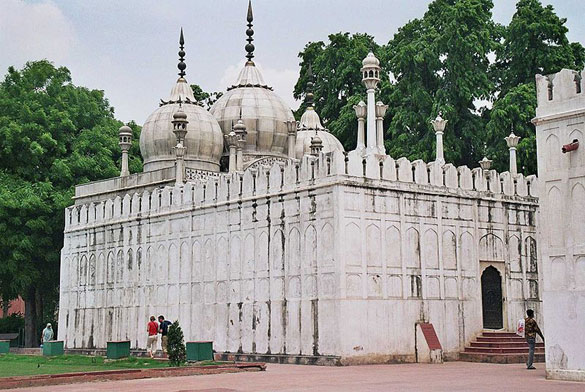 Moti Masjid: Mughal emperor Aurangzeb (AD 1618-1707) – successor of Shah Jahan (AD 1592-1666), built this mosque exclusively for the royal family within the premises of the Red Fort in 1662. The total cost was Rs. 2,10,000 or (11/2 lakh and 60,000) rupees. Constructed of entirely white marble, its well designed entrance gate is made of brass. The plinth of 31/2 feet measures some 40 feet in length, 30 feet in width and 25 feet in height. Its beautiful lofty doors are made of brass. The original domes of the mosque were made of heavily gilt copper. But they were destroyed during the Sepoy Mutiny. It was only later that the marble domes were added to the mosque.

Jama Masjid made of red sandstone and white marble