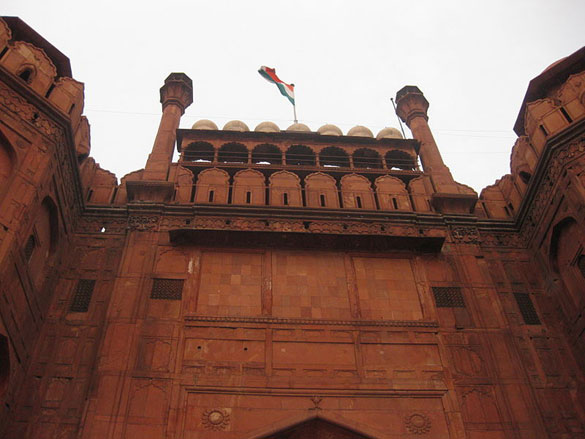 Red Fort: Also known as the ‘Lal Quila’, it is an architectural masterpiece. It was the official residence of Mughal emperor Shah Jahan (AD 1592-1666), his courtiers and staff. An underlined statement on the magnificence, opulence and unparalled might of the Mughal power at its height there are 15 exquisite buildings within the fort. The juxtaposition of the European-design multi-storied structures to the western side of the complex provides the tourist with a parallel comparison of the Mughal and the British architectural feats.

To feel that exalted feeling inside the Red Fort, simply visualize the date of its construction when the Mughal empire was at its height. The awe-inspiring elaborate decorations on the walls studded with precious pearls and stones, the intricate air-conditioning system what with a stream of the Yamuna flowing within the complex, the exalted durbar at the entrance where the emperor used to hold his public hearings, the feminine touch of the chambers reserved for the queen and her consort, the engineering feat of the entire project speak volumes.

However, the signs of pilferage and theft of the valuable precious and semi-precious stones reflected on the vacant slots on the walls of the fort will also make you ponder on mankind’s evil designs.

This fort is also significant as it was the scene of the Sepoy Mutiny of 1857 – the first war of India’s Independence. The Lahore Gate on its western side is also a forceful symbol in India’s fight for independence. It is from the ramparts of the Red Fort – at this gate that the Prime Minister of India unfurls the tricolor and addresses the nation on Independence Day (January 26) every year.