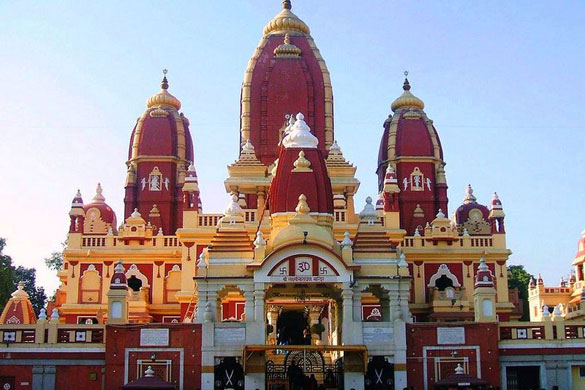 Birla Mandir: This important temple with many shrines and an extensive garden is quite close to Connaught Place. Built by prominent industrialist Raja Baldev Birla, it is dedicated to Laxmi (the Hindu goddess of wealth) and Narayana (or Vishnu – the Preserver of the world according to Hindu beliefs). Therefore, Birla Mandir is also known as the Laxminarayan Temple. Mahatma Gandhi inaugurated it in 1938 on the condition that all people cutting across caste, creed and religion would be allowed to offer their prayers there. Hence Birla Mandir is the first temple in India not to have any caste restrictions. Bapuji was a regular visitor and often prayed there. Inside the main temple, several temples dedicated to the various gods and goddesses in the Hindu pantheon are located. The temple dedicated to the presiding deities of Goddess Laxmi and Lord Narayan is on the right side and to its left is the temple dedicated to Goddess Durga. The yagnashala (sacrificial spot) is at the rear side of the main temple. It is placed against an artificial but very naturally appealing backdrop of hills, caves and springs. The Gita Bhawan with a huge image of Lord Krishna is located beside the Mandir. Its walls have scenes from one of the two Hindu epics – the Mahabharata. You would also come across the life story of Gautama Buddha – the founder of Buddhism. Besides these, the temple complex also has a guest house and a library. Birla Mandir remains open for public from 6 a.m to 10 p.m. daily.