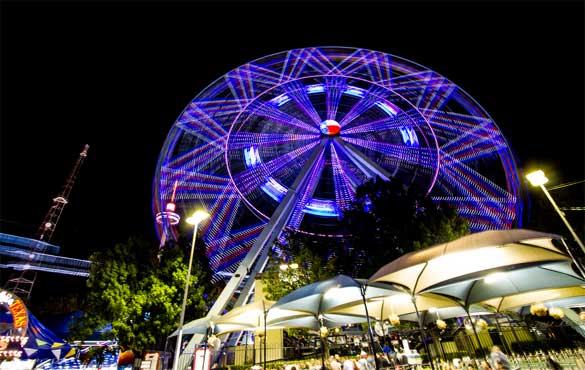 Created in 1936 for a Centennial Exposition, the Texas Independence themed Fair Park is a superb place to meet organizations, and amusement venues and see fantastic performances. The grounds are really safe, but it is best to stick within them as the areas East and South of this part of Dallas are quite dangerous for tourists.

The busiest time for Fair Park is during the annual extravaganza that is the State Fair of Texas. This three week long fair is the largest in the United States and attracts over 3,000,000 visitors!

First off, I recommend visiting the Women’s Museum to see the distinctive history of women and their role in the history of the United States and Texas. This exhibit tells tales of female spies employed by George Washington – commander of the continental army – to gather intelligence on his enemies. Other military roles for women include their work as spies and munitions manufacturers, as well as propagandists for the allies such as Marlene Dietrich’s who recorded an album to lower German morale. When visiting this exhibit at the Texas State Fair, be sure to check out the ‘Funny Women’ video, a hilarious collection of women in comedy.

The museum of nature and science has hands on experiences that are perfect for the little ones. Children will love the interactive DNA exhibit and the paleontology laboratory. The exhibit has five floors and 11 permanent halls with state of the art video (the IMAX theatre rocks!) and 3D computer animation labs. In the lower levels there is an educational wing with learning labs that teach all about space and the Universe.

At this point, you’ll likely be a little hungry and thirsty from all this museum action. I recommend the Old Mill Inn, famous for its special deserts and banana pudding. The history of this Inn is as rich as the banana pudding, built in 1936 during the Texas Centennial Exposition, it is themed as an old flour mill. Inside you’ll find both food in the restaurant as well as fun activities for the kids. Check out “Elsie” the cow, her husband “Elmer” and their calf son called “Beauregard”!

After you’ve visited Elsie and sent her my regards and stuffed your belly full of Cake, let’s take a stroll in the gardens. The Texas State Fair has another exhibited called the Texas Discovery Gardens. Their mission as an organization is to restore and conserve nature in an urban setting. They focus on gardening in organic ways and encouraging Texas residents and visitors to the area to do the same. Their gardens at the Texas State Fair span some 7.5 acres of land – harbouring native Texas plants and imported exotic wildlife and fauna. If you are a parent, this is a great place to take the kids so they can wander off on a guided tour with an educator and you can learn more about how to take care of your garden at home from the experts. The native butterfly habitat shows the whole life cycle of butterflies and how they affect other animals in the food chain.

Sevy writes for a travel blog.

Malmo Sweden For The Family

How to Plan the Best RV Road Trip in Texas

Your Austin, Texas Itinerary: So Much to Do, So Little Time

How Does Six Flags Over Texas Compare?

How To Drive In Texas A Guide For Newcomers And Locals

What Are Some Things To Consider When Moving To San Antonio?