7 Travel Destinations for Catholics in Goa 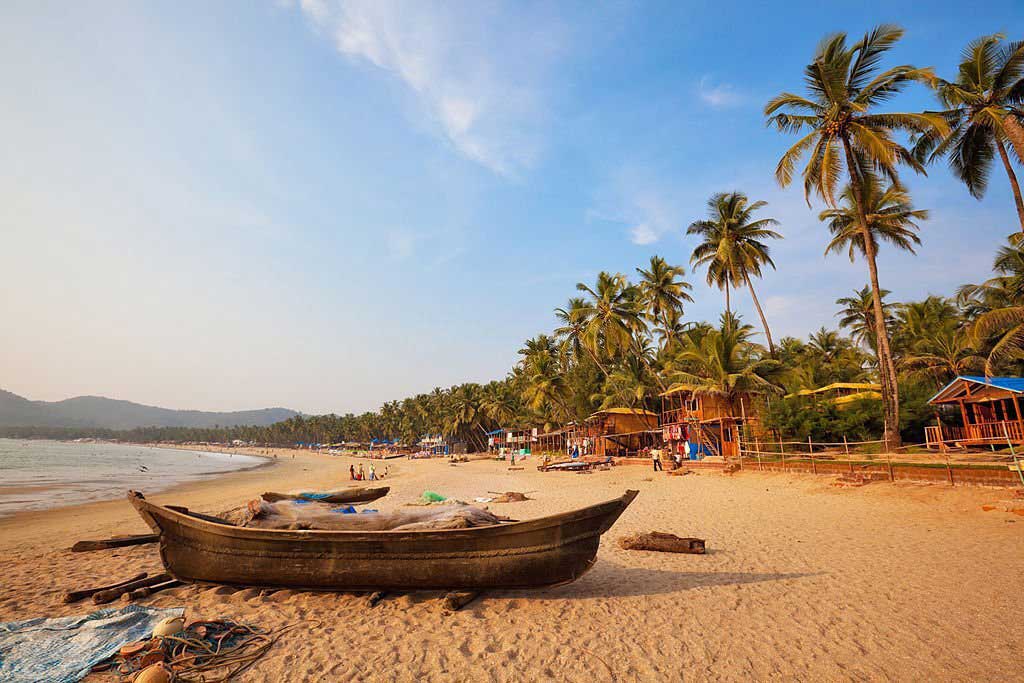 Destinations for Catholics in Goa: While Christianity in India first arrived in the state of Kerala, Catholicism reached its peak in India with the Portuguese colonization of the state of Goa. Known for its beaches, seafood and the distinctive culture of the Goanese people, Goa is also home to some of the most intricately designed Chapels, Churches and Convents that belong to the Roman Catholic sect of Christianity. Most of these churches were built by the Portuguese and display a distinctive architectural style that cannot be seen elsewhere in the Country. If you are a Catholic, here are some of the best Destinations for Catholics in Goa you must visit. 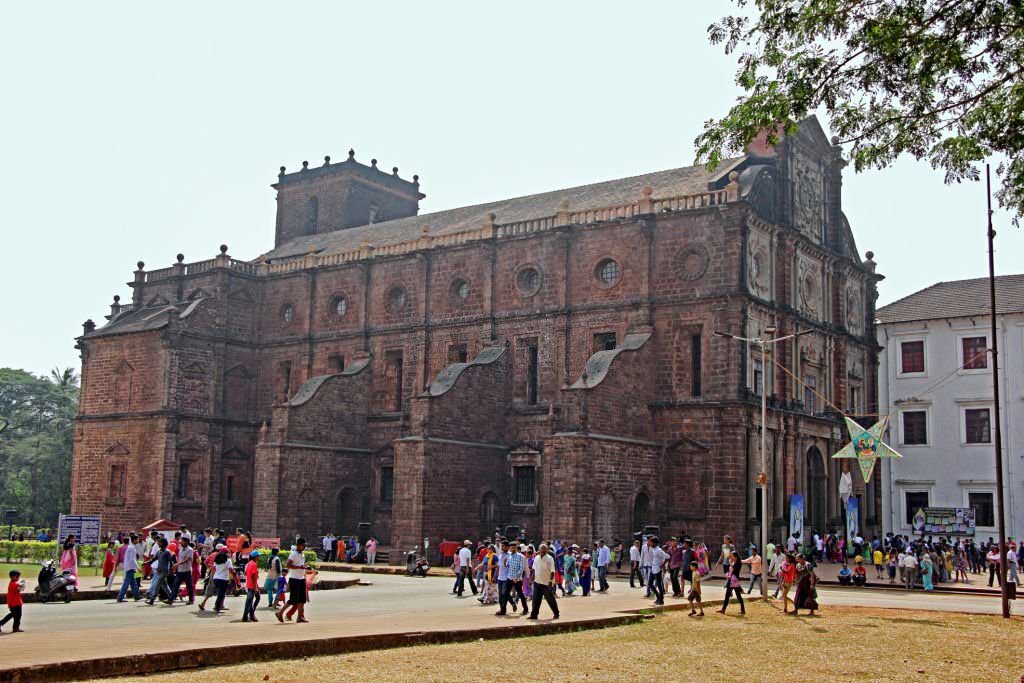 A UNESCO World Heritage Site, The Basilica of Bom Jesus was completed in 1605 and was built by the Jesuits during the Portuguese rule in Goa. Built in unique Baroque style architecture, the name Bom Jesus means Good Jesus, a term commonly used for Portuguese colonial churches. Being one of the oldest churches in India and the first minor Basilica in India, the church holds the body of St. Francis Xavier encased in a gilded casket. The relics were a Gift from the Grand Duke of Tuscany and are displayed once in every 10 years. The monumental building is open to visitors all day and enshrines a majestic Altar with highly ornamental designs. Like most old churches, this is located in the Old Goa district which was the erstwhile capital of the Portuguese.

2. The Church and Convent of St. Monica 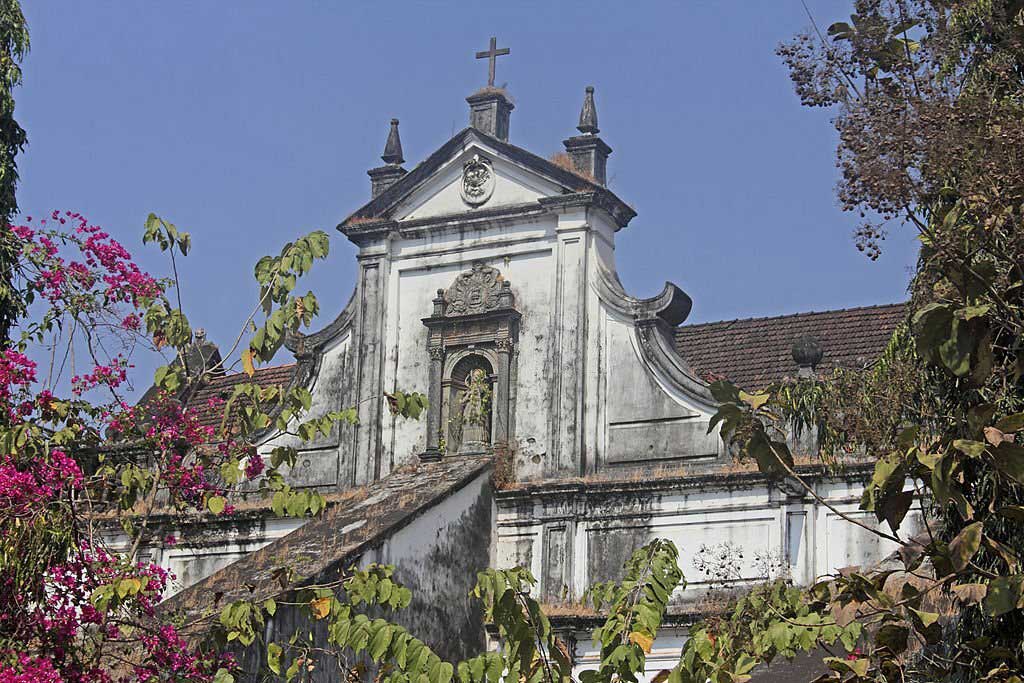 Built by the Portuguese rulers, the Convent of St. Monica is a church and a nunnery located in the Old Goa district. The construction of the church was completed in 1627 but it was burned down after nine years. It was completely rebuilt and overhauled in 1936 and is one of the oldest convents in India. Built in a unique Tuscan style, the Church’s dome is decorated with several murals, several of which have now been restored. The building premises also house an art museum which contains several specimens of 16th and 19th century Christian and Hindu art. The church is open every day to visitors between 9.30 am to 5.00 pm. 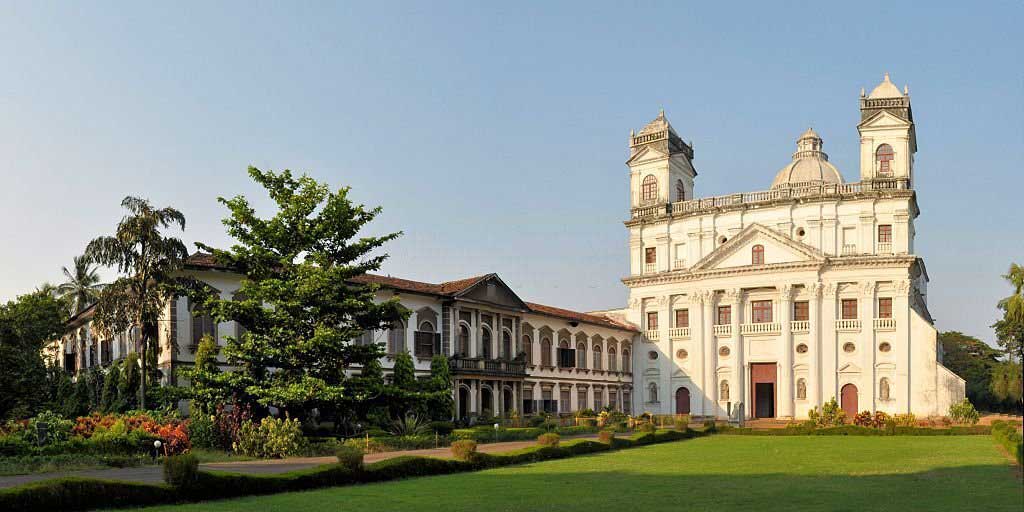 The Church of Saint Cajetan is one of the best examples of Corinthian style architecture in India and was built by the Italian friars in 1661. The structure of the church is based on the Basilica of St. Peter in Rome and is one of the most elaborately designed churches in Goa. The church’s design is meant to replicate a Greek cross and contains 6 smaller altars and one main gilded altar dedicated to Our Lady of Providence. The building also contains some rare paintings from the 17th century and a huge dome which is well lit by the windows that decorate it. The church is famous for its enchanting architecture which is a fine cross between Corinthian and Goan architecture.

4. Church of St. Francis of Assisi 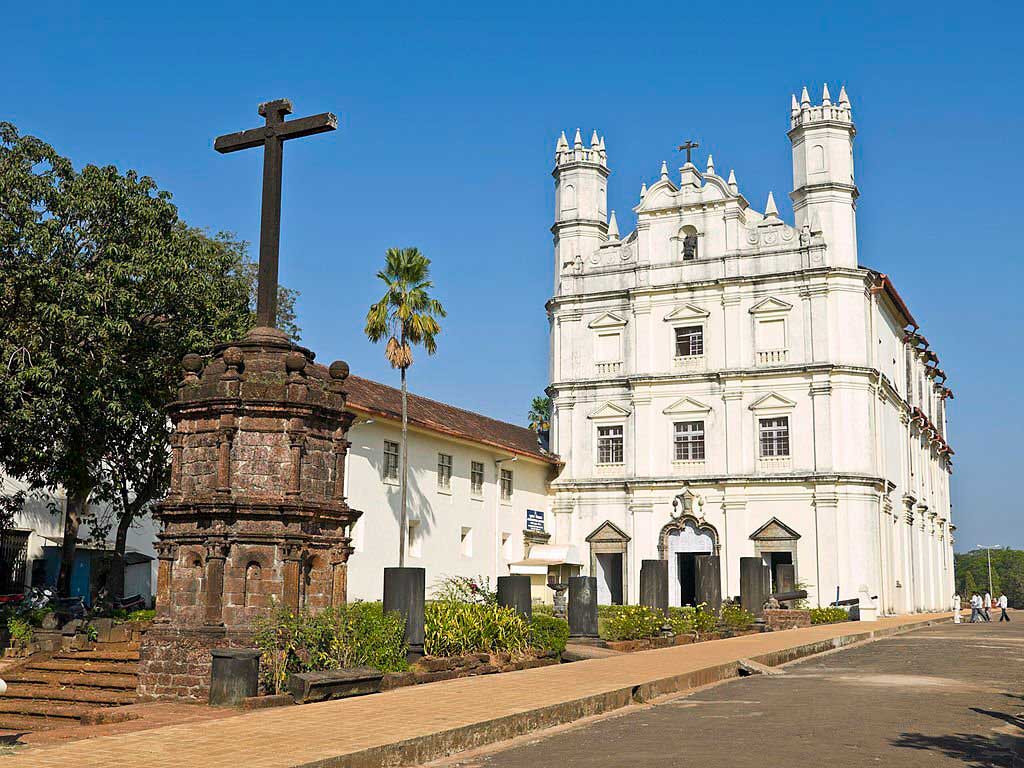 Built using lime plastered Laterite blocks; the church was the former residence of the Archbishop and was built in 1661. The entrance displays an evident Manueline influence and the front façade is built in typical Tuscan style architecture. The interior walls are decorated with flowery frescoes and enshrine a statue of our Lady of Miracles which was brought from Ceylon (Sri Lanka). The main alter is highly baroque in design and contains a large statue of the church’s patron, St. Francis of Assisi and a crucifix with a large statue of Jesus Christ. One can also see the statues of St. Peter and St. Paul beneath the altar. The nave contains several paintings that depict various incidences from the life and times of St. Francis of Assisi. 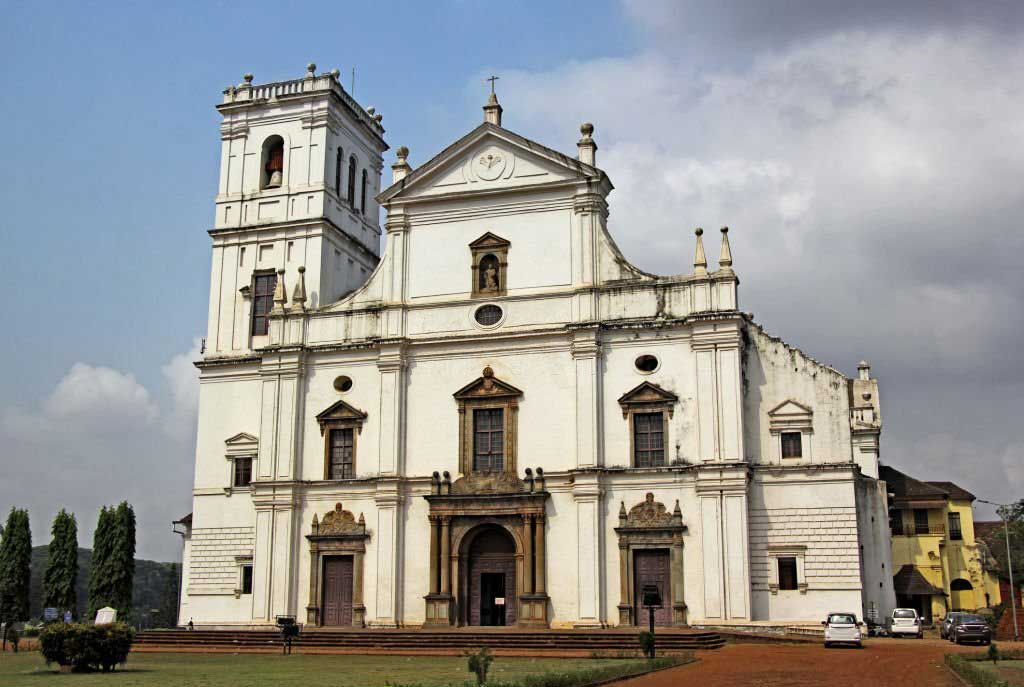 Se Cathedral is essentially the largest church in India and is also serves as the seat to the Patriarch of East Indies and is the Cathedral of the Roman Catholic Archdiocese of Goa & Daman. The church’s construction was completed in 1619, but was consecrated and opened for prayers in 1640. The Cathedral was also awarded the ‘Golden Rose’ by Pope Pius XII in 1953 as a symbol of reverence. The church is one of the best examples of the fine cross between Manueline and Tuscan architecture which was brought by the Portuguese in India. The church’s bell is also of special mention due to his large size and its enchantingly warm tone and is also nicknamed as the ‘Golden Bell’. The patron of the church is St Catherine of Alexandria and is encased in a gilded altar. Also in the building, one can also find several depictions of the Saint’s life.

6. Our Lady of the Immaculate Conception Church 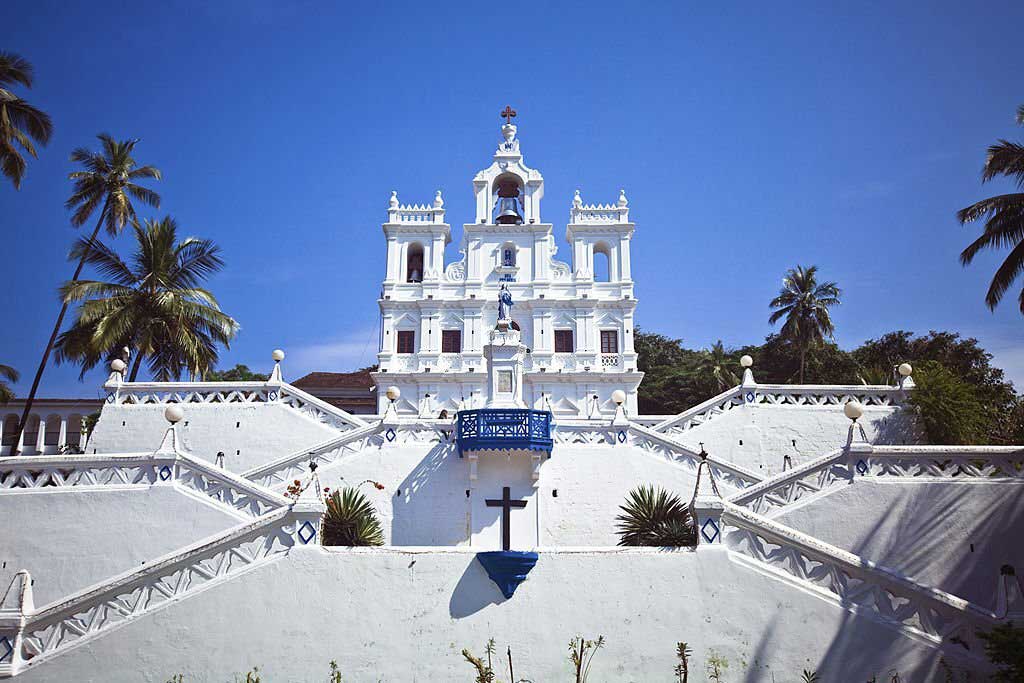 Built in 1541, Our Lady of the Immaculate Conception Church is located in the capital city of Panjim and houses the second largest church bell in Goa. The original building of the church was significantly smaller as it was meant to be a small chapel. It was rebuilt in the following years to meet the spiritual and religious demands of the inhabitants and received recognition as a church. The zigzag staircase that welcomes the visitors was added in the 18th century and has now become a distinctive feature of the building. While the exterior of the church lacks variety in color, it makes up for its intricately designed façade, built in a pure Portuguese style Baroque architecture. The main altar enshrines a statue of the patron Virgin Mary and also houses a chapel dedicated to St. Francis Xavier towards the right side of the main altar. 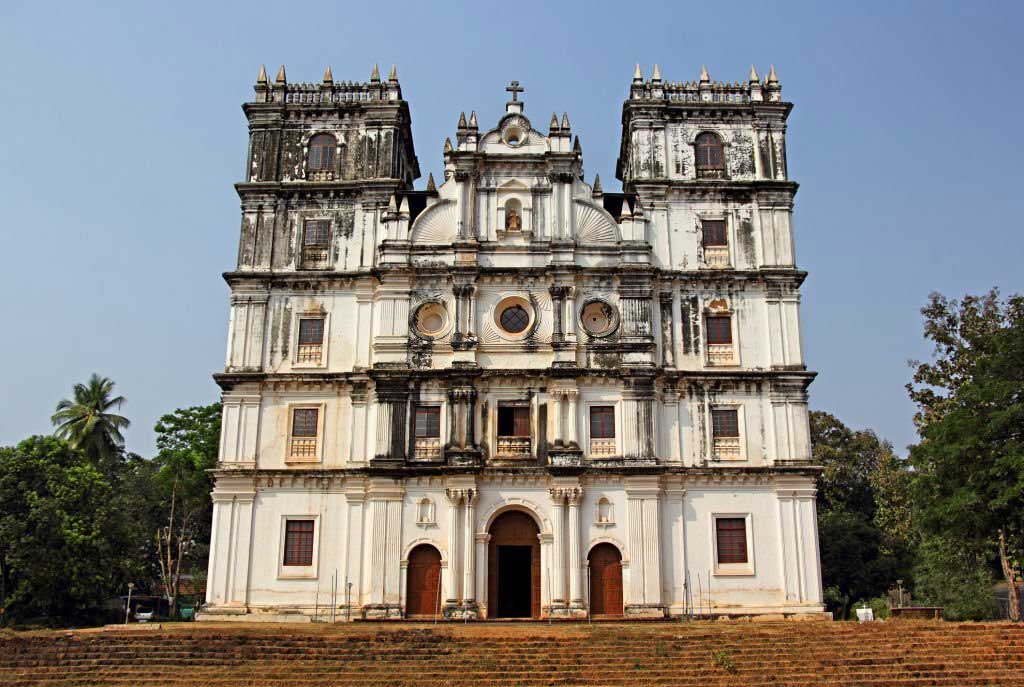 Located in picturesque hills of Talaulim, the Church of St. Anne was built by the Portuguese in 1695 and is the finest Baroque-style monument outside Old Goa district. The structure of the church is a fine mix of Tuscan and Goan architecture and incorporates several influences from Indian as well as European designs. The story behind the building of this church is also linked to the apparitions of St. Anne which were witnessed by local villagers and to an old lady who was a Hindu Brahmin. The church is one of the most important Catholic buildings outside Old Goa and is visited by tourists from all across the globe.

Despite of Goa being hailed as a holiday destination with beaches, foreign tourists and frolic, it is also of prime importance to the Christian devotees in India. Even though most of the churches found in Goa are catholic, their unique architecture and the rich history connected with them, attracts visitors from all religions and beliefs.

Hope you love reading “7 Travel Destinations for Catholics in Goa”. Share your view in the comment section below.

Author Bio: Rohit loves travelling and exploring new cultures and has visited several famous tourist places in India and the world. His love for music, food and architecture often takes him to several interesting places and his travel stories are often featured across various blogs and websites.

Different Types of Travellers around the world

The Best Bars in Melbourne

Goa The Land of Happening Beaches

10 Top Beaches In Goa You Must Visit