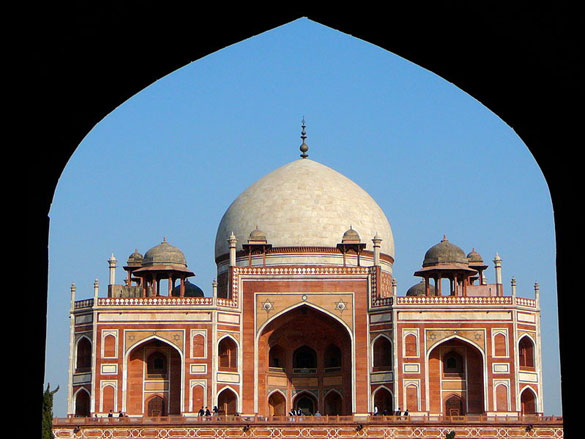 Humayun’s Tomb: One of the arresting architectures of the Mughal era in Delhi, Humayun’s Tomb is often referred to as the prototype to the world famous Taj Mahal built by one of his descendents Shah Jahan in Agra much later. It is actually a tribute to the second Mughal Emperor, Humayun, by his senior widow Haji Begum. The octagonal shaped tomb was constructed at an approximate cost of 16 lakh of rupees. The construction work commenced in AD 1556 and got completed in AD1569. The mausoleum is capped by a double dome rising up to 38 m (125 feet) into the open sky. The monument is situated amidst a sprawling garden. The complex is enclosed by high walls on three sides. In fact, the Humayun’s Tomb is the first mausoleum in India to have a park. One gets a glimpse of the spectacular mixture of the Indian culture and the Parsi architectural style. The complex also has the tombs of several members of the royal family including Humayun’s widow Hamera Bano, Jahandar Shah, Farukh Shayar, Alamgir-II and Shah Jahan’s son Dara Shukoh. The gates to the monument remain open for the public from 10 a.m. to 8 p.m. daily.