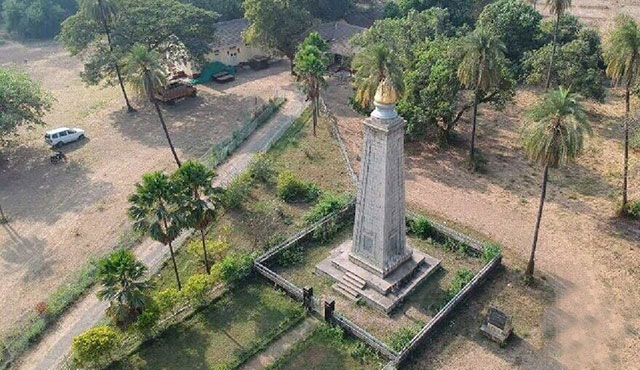 Sanjan is a town situated in the state of Gujarat, India. It is in the Umargam taluka of Valsad district. It is one of the earliest settlements of the Parsi people.

Sanjan Stambh is a memorial column at Sanjan in Gujarat. It commemorates the arrival of Zoroastrians there eleven centuries ago—a group of shipwrecked migrants who had fled Muslim persecution after the downfall of the Persian Empire and were welcomed to India by Hindu king Jadi Rana.

It states the date of arrival at 936 CE. It was constructed in the year 1920 to perpetuate the memory of the arrival of the Zoroastrians in India. There is a Parsi Dharamshala in the complex. The local Parsis of Sanjan celebrate the arrival of the community by celebrating Sanjan Day in November. The ‘Stambh’ is made of Vadodara granite. Its height, including the leaping flames of fire, is 50 feet. The column rests on a square platform. There are 23 decorative rosettes.

This memorial column was erected to perpetuate the landing of the Zoroastrians in India. It is also called the sanjan stambh. Stambh means pillar in local Gujarati. There is a Parsi Dharamshala or a resting house in the complex.

The local Parsis of sanjan celebrate the arrival of the community by celebrating Sanjan Day. This is a public Fuction attended by Parsis from all around in large numbers. This event is usually held around November 21 every year.