Orchha town beside the Betwa River

Founded by Bundela Rajput chief Maharaja Rudra Pratap Singh (AD 1501-1531), Orchha (also pronounced and at times written as ‘Urchha’) was the capital of the Bundela rulers since its inception in AD 1501. Located in the Central Indian State of Madhya Pradesh, this town situated beside the Betwa River is within the district of Tikamgarh. 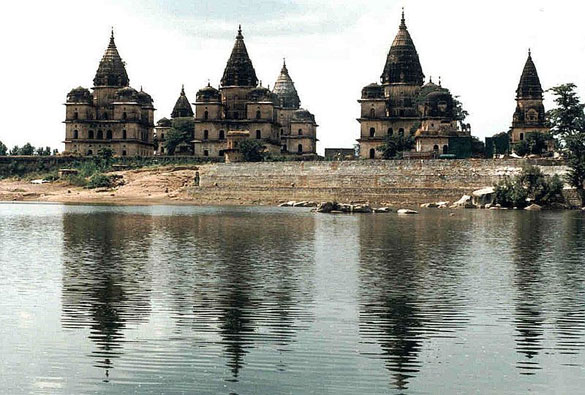 Chhatris on the bank of the Betwa River. Image Source wikipedia

NOMENCLATURE: In the local parlance, the term ‘Orchha’ means the “concealed region”. The place has lived up to this connotation today as it is apparently a merely knot of undergrowth forest known as ‘dhak’. Though a sleepy urban center now, it still proclaims its charm of those medieval times.

ATTRACTION: The best part of Orchha is that you can just stroll around to get the serene and yet majestic aura of the locale. You can listen to the Bundela folk music and dialect once you listen to Radio Bundelkhand, the community radio station available on 90.4 MHz that was launched on October 23, 2008.

The following four points make it an ideal tourist destination:

(a) Its scenic beauty
(b) The sparklingly clear waters of the Betwa River;
(c) The gossamer saris of Chanderi as well as the metallic chariots of Jhakhora showcase the stupendously fine craftsmanship of the artisans of Bundelkhand. It is also home to the finest architecture of the Bundelas reflected in the Badal Mahal, the Koshak Mahal, and the Jama Masjid besides other monuments; and
(d) The glorious annals of the place reflected in its typical Bundela architecture representing a synthesis of the Rajput and the Mughal styles. LIK — a research team of the Indian Institute of Technology (IIT) Roorkee (India), documented these buildings of Orchha in 2006.

Reaching Orchha: The Means for the Ways

Orchha is well accessible by road, rail and also air. Let’s check them out:

Road: Orchha hardly takes a 90-minute drive to reach this place from Gwalior located to its north. It is well linked by roadways with the major cities of the country including the national capital Delhi and also the Hindu pilgrimage spot Varanasi. It is situated 15 km from Jhansi (Uttar Pradesh) and 80 km from Tikamgarh.

Do check out the following comparative chart on the distances among the main stoppages on this set of tour (shown in km): Orchha is situated 625 km from Delhi via Agra and Gwalior. Between Agra and Orchha via Gwalior, the total distance is 238 km; and the distance between Orchha and Khajuraho — the final stop in this set of itinerary — is just 178 km.

Rail: Jhansi is the nearest rail station which is also a major rail junction of North Central Railways. The Orchha Railway station falls on the Jhansi-Manikpur section. From Khajuraho, you can also catch the morning (8 or 9 am) or the afternoon expresses (12 noon or 1 p.m.) to the Orchha railway station which is hardly five hours away. From the train station you can proceed to Orchha on a ‘tuk tuk’ (auto rickshaw) spending at the most Rs 15 as the fare.

Air: The exotic spot of Khajuraho is the closest airport. From the Khajuraho airport, you can have direct flights to Gwalior and the principal tourist destination spots in the state of Madhya Pradesh.

TOURING TIME: The most pleasurable time to visit Gwalior is in the wintry months especially the period from the fag end of October to early March.

MUST ENJOY: You must enjoy the sound-and-light shows that showcase and bring to life the personalities, and significant incidents besides recreating the history of a particular location. These bilingual (separately arranged in English and Hindi) shows are an integral part of the tourists’ itinerary at the cenotaphs or chhatris, the Chaturbhuj temple, the Raj Mahal, and the Jehangir Mahal among others. The entrance fee for the sound-and-light shows are Rs. 250.00 for each foreign tourist and Rs. 75.00 for an Indian visitor. During the summer months from March to October, the one-hour English show starts at 7:30 p.m. while the Hindi version commences at 8:45 p.m. On the other hand, the timings are advanced by an hour in each instance during the wintry months from November to February (i.e., from 6:30 p.m. for the English show and 7:45 p.m.)

The Unseen Risks And Unexpected Dangers Of Working And Living Abroad