Referred to as the City of Lakes, Mahoba is located 140 km from the historically important town of Jhansi. A principal cultural hub, Mahoba ballads sing of Alha and Udal – the two soldier siblings of the place and extol their legendary exploits. The songs speak of the duo’s fight for their motherland and their supreme sacrifice for the noble cause. The betel leaves of Mahoba are quite popular. You can very well go for a paan (prepared from various ingredients like dry betel nut slices, and many other items including tobacco). Of course, you can go for a non-tobacco (sweet or plain) paan as well. The silver fishes of Mahoba are ideal mementoes.

One of the bastions of the Chandela Dynasty, the Mahoba fortress is yet another formidable citadel in India. The Chandela rulers held dominion over the wide-spread Bundelkhand across significant portions in central, northern, and western India. The most eloquent representation of the Chandela architectural style is to be found in Khajuraho (described below) in the Central Indian State of Madhya Pradesh. The Chandelas and the Bundelas like all the ruling races of this sub-continent innovated ingenuous means to harvest natural water. The fantastic water management strategies as well as the construction of the formidable Mahoba Fort atop the hill proclaim the tremendous feats of engineering during those times.

Lakes, Temples and Forts: The many rocky islands beside the several lakes are dotted by places of historical and archaeological significance. Besides the temples representing the characteristic Chandela and Bundela Khajuraho-akin architectural style, there are also the Jain temples built during the 12th century AD. Each lake has its typical scenic beauty. The oldest lake is the Kirat Sagar. It was dug out during the reign of King Kirtivarman sometime between AD 1060 and AD 1100. Its bank has been finely designed with granite stones and slabs. 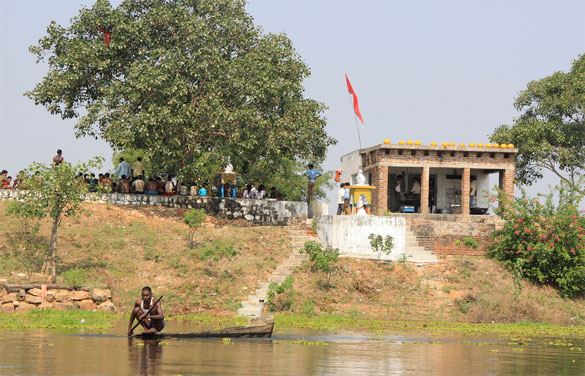 Another lake providing a breathtaking spectacle is the Madan Sagar built by King Madanvarman between AD 1128 and AD 1165. There are three famous temples on its embankment. The shrine dedicated to Hindu God Lord Shiva — the Preserver and the Destroyer of the World — is constructed of granite. Known as the Kakramath Temple, its architectural style is similar to that of the temples in Khajuraho. Near the Shiva mandir is the Vishnu temple; and the Maniya Dev Temple dedicated to the protective deity of the Chandelas. Located near the Mahoba Fort, there is a monolith pillar of granite. It stands 18 feet high on a base of 1.75 feet width. A few paces away is located the mazar (shrine) of Muslim Sufi saint Pir Mubarak Shah who hailed from Arabia and settled down at Mahoba in AD 1252.

The Rahila Sagar was constructed by Chandela ruler Rahila. He reigned from AD 890 to AD 910. Beside this picturesque artificial water reservoir stands the remnants of the Sun Temple dating back to the ninth century AD. Made of granite, its architecture reflects the early Pratihara style and the influence of the Pratihara Dynasty in the region. Two other prominent lakes are the Vijay Sagar and the Kalyan Sagar.