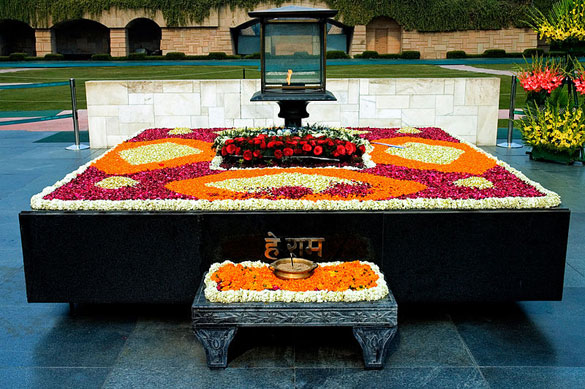 Memorials to leaders: The memorials of India’s great leaders have been given the position of significant landmarks in Delhi. This is done with the dual purpose of not only honoring the personalities but also to keep their memories alive. The most popular is Raj Ghat – the national memorial dedicated to Mahatma Gandhi (fondly called Bapuji by the masses), the father of the nation and the apostle of non-violence. After Bapuji fell to the bullets of a Hindu fanatic, his body was cremated on the banks of the Yamuna River in Delhi. Prayers are held at this national shrine to the Mahatma (Great Soul) at 5 p.m. every Friday. Special prayers are held every year on October 2 – his birth date – and also on January 30 – the day he was assassinated. The sandstone walls have inscriptions of various passages written by Bapuji. The Gandhi Museum is located near Raj Ghat. There, one can see the things that he used as well as other memorabilia. After taking a tour of the well-equipped museum and having a glimpse at the gallery of photographs related to Bapuji, you would have an overall idea of the many incidents of his life. There is also the Gandhi Library beside the Museum. The library has many books on Gandhian philosophy.

Many more momorials have been here over the years. They are Shanti Vana for Pandit Jawaharlal Nehru (the first Prime Minister of India), Vijay Ghat for Lal Bahadur Shastri, Shakti Sthala for Indira Gandhi, Kisan Ghat for Chaudhary Charan Singh, and Vir Bhumi for Rajiv Gandhi.

Jama Masjid made of red sandstone and white marble