Love Proper Food And Real Ale? 5 Of The Best Gastro-Pubs In London 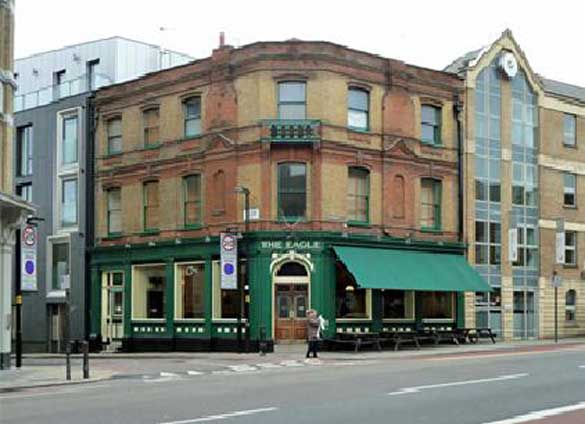 This is where it all began. In 1991 Mike Belben and David Eyre took over this place and in their ingenious plan to put as much emphasis on food as they did drink, it’s now widely acknowledged as London’s first gastro-pub. It was here that the template of the gastro-pub was forged: faux-scruffy wooden floors, open plan kitchen, menus on blackboards and a claim to serve real food to go with their real ale.

For anyone with an interest in the development of the gastro-pub, it’s a must visit. The Eagle’s good value food and drink has made it very popular with local residents and the workers in the City alike. It may be a bit of a detour from the tourist trail, but it is well worth a visit..

Sherlock Holmes 10-11 Northumberland Street, Westminster, WC2N 5DB (Nearest Tubes- Embankment, Charing Cross) Although this place is very much in the heart of the West End, (literally in the shadow of Nelson’s Column) it feels a lot less manic than similar places you’d find nearby Leicester Square or Whitehall. It’s the pub’s’ association with the works of Arthur Conan Doyle that put it on the map, but saying that, this place is much more than just a gimmick..

In 1957, the pub, then called the Northumberland Arms, was selected as the permanent home for a Sherlock Holmes exhibition, which had been on a world tour, following the Festival of Britain six years earlier. The pub features extensively in the Sherlock Holmes novels, and these days it is home to great deal of memorabilia. Beyond this, the food is good, even if the selection and prices are not that different from any other hyper-touristy West End pub. But then again, if you can’t whinge about being ripped off, what’s the point of coming to London?

Ye Olde Cheshire Cheese, 145 Fleet Street, City of London, EC4A 2BU (Nearest Tube: Temple)‘Historical’ is the probably the best word to describe this place. Like St. Pauls Cathedral, just a few hundred yards to the east up Ludgate Hill, the Cheese re-emerged from the ashes of The Great Fire of London in 1666. This was the pub of Samuel Johnson. This was the pub of Charles Dickens. There is even a stuffed parrot behind the bar of the Cheese. A former pet, it was so popular with the journalists that worked along Fleet Street, that at the time of its death in 1926,there were obituaries published for it in every major newspaper.

These days, The Cheese provides its patrons with excellent value food (the pies come particularly highly recommended), fantastic beer – you won’t find any brands you recognise but what is there is excellent (and comes in at under the holy grail of three pints for a tenner). Moreover, it manages to do all this while providing a fascinating glimpse into London’s past.

We venture away from inner London for this one, to the idyllic surroundings of Kew Green. The food here is excellent and this partly because The Greyhound is a joint venture with Greedies, an emerging restaurant chain, with branches developing throughout West London.

The location is the real winner here though. The Royal Botanical Gardens at Kew are just a few minutes’ walk away, and the River is just behind you. All of this is a mere 25 minutes away from the heart of London and Waterloo Station. It all adds to the perfect place to spend an evening away from inner city hustle and bustle of London.

London has far more open space than any city of corresponding size in the world. As such the phrase “quiet tranquillity in the heart of the city” is somewhat obsolete. But there is still something special about the side streets, the mews, and the little cottages of Belgravia, where you find the Horse and Groom.

There’s something slightly magical about the way it can feel like the middle of the English countryside when it’s wedged between Hyde Park Corner and Victoria Station. The atmosphere of the pub is fantastic, it feels like a “local” in a way few central London pubs do. Its popularity with the Belgravia locals, a group of people not particularly known for their tolerance of second best, would suggest the food and drink can’t be bad either.

Hopefully this is enough to inspire you to eat and drink your way through London’s finest gastro pubs. Explore London’s pies, pints and culture!

These are just a few of my recommendations, but are there any other pubs you love? Or have you tried any of these pubs out yourself? Share your thoughts below.

Alex is an enthusiastic newcomer to the world of blogging. He has lived in London (almost) all his life and consequently has a tremendous amount of affection for the city, particularly its pubs. For hotels, he recommends BHRC.

How Does Six Flags Over Texas Compare?

Making Your Home In Ocean City

Travelling To London With Physical Disabilities: Your Short Guide

Where To Shop In London