Home DestinationSouth America Driving To Argentina: 5 Essential Items You Must Take With You
South America

Driving To Argentina: 5 Essential Items You Must Take With You

It’s a crazy idea, but it just might work! 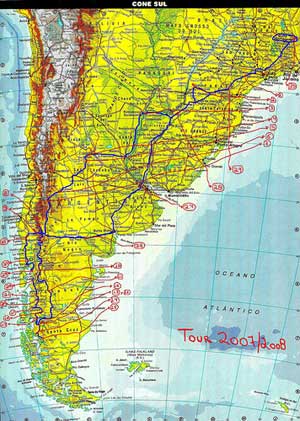 What if you could go to Argentina for a vacation? And instead of flying, you took a different method of transportation – your car. After all, you’ve got a few months to spare. Why not go for it? Not only will you get to Argentina, but you’ll get to experience (as much as you want to, anyway) the cultures of a dozen other countries on the way.

It is a long way to drive, though, so make sure you’re prepared for it. Here’s a list of crucial items you’ll want to have with you.

This one is a given; you should have your passport whenever you go outside of the country, even if you don’t need a visa. Which is something you don’t really need in this case. The catch is you have to leave the country you enter with your car. Do check each country’s requirements to make sure the rules haven’t changed, but generally you’ll be able to enter and leave with a passport. You’ll have a ton of stamps to show off when you’re done!

At least one passenger, preferably a few more

You already know the trip will be long, but you don’t really realize how long it is until you make it. You also don’t know the roads and towns you’ll be encountering or how safe they are. Having someone with you will make the trip more enjoyable; having several will make it safer.

The road to Argentina is fairly continuous, but there’s one large gap you won’t be able to get across. Darien Gap, between Panama and Guatemala, doesn’t have a bridge and will require shipping your car. To do so, you need the original title (and about $1000).

Anyone who’s been to South and Central America for anything other than a resort vacation will attest to the fact that almost everyone assumes Americans come with lots of money attached to them. That’s fine for most people, but you’ll inevitably come across shady characters, and unfortunately many of them are government officials, border patrol, and police officers. They’ll try to extort money from you in a variety of (non-violent) ways, so you need to be aware of the possible scams and keep your wits. Here’s a great article about dealing with corrupt police in foreign countries.

You need to be sure you know how much money you need (it’ll probably be somewhere in the $10,000-$20,000 range). It’s also a good idea to know how far you plan to get in a day and do research to make sure the places you want to stay are safe. Fortunately, you don’t need a tricked out, commercial GPS to do this either. A great asset to the trip is the Pan-American Highway, which will get you into Argentina. Trace the route, mark your stops, and research them. Plan ahead and you’ll run into fewer problems.

It’s bound to be an amazing trip. Read other blogs about travelling the Americas to get several perspectives and be informed about the necessary cautions you should take. Blog about your trip yourself as you’re on it! You already know it’s going to be the adventure of a lifetime.

Ashely and her friends take a raodtrip every year. She likes to share raodtrip tips and ideas. To see more, check out her Twitter @ashelymarie1985.

Travel Etiquette For Riding The Bus

Exploring Peru – Some of the Best Things to Do and See during the...

Cross Items Off Your Bucket List When You Travel To Patagonia