Let’s take a quick tour of those places: 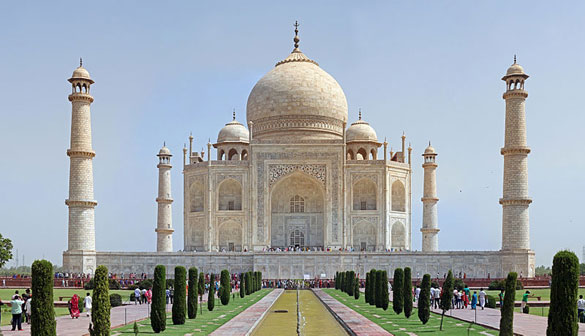 Recently voted as one of the Seven Wonders of the World, the Taj Mahal is a marvelous piece of poetry. It is probably India’s most mesmerizing monument. This marble mausoleum was built by Mughal Emperor Shah Jahan (1592-1666) for his beloved queen Mumtaz Mahal. Built under the supervision of Persian architect Ustad Isa, it took 22 years (1630-52) to complete this perfectly symmetrical tomb. He involved 20,000 jewelers, masons, and workers in bringing to fruition the design.

The exquisite craftsmanship of the sprawling structure eludes any definition. Every single marble of this structure carries within it a history. The beauty of man’s creativity reflected at every centimeter of the inlaid walls and each marble screen will make you stop at every step to marvel at the expertise of those who made them. The entrance to the Taj Mahal is made of red sandstone. Verses from the Koran are inscribed on its walls.

Its vaulted arches, the four minarets and the semi-inlaid precious stones are but a preamble to the central dome of the Taj Mahal. It is below this dome that the cenotaphs of Mumtaz Mahal and Shah Jahan are placed. These are simply for display. Actually, the mortal remains of the Mughal king and his queen are far below in a locked basement. They remain in their respective tombs – united in death – hidden from the human eye. 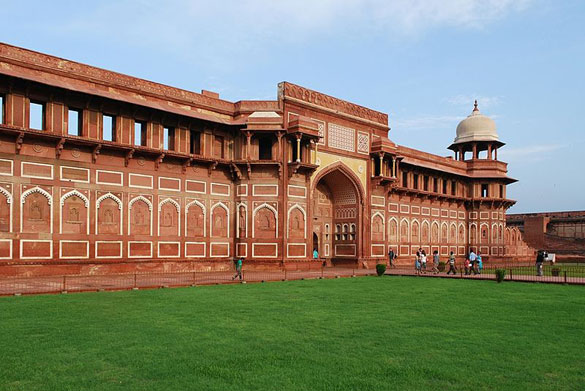 Image Source Wikipedia
Mughal Emperor Akbar the Great (1542-1605) commissioned the work of the Agra Fort in AD 1565.The very sight of this eye-catching and imposing red sandstone fortress will transport you to the bygone Mughal days. You would also be reminded of the Red Fort in Delhi due to the architectural and aesthetic similarities between these two monuments. Several additions were made till the time of Shah Jahan, his grandson.

You would be further amazed by the following buildings within the fort complex: Jahangir’s Palace, Sheesh Mahal (mirrored palace), Khaas Mahal, Musamman Burj, the two halls for Emperor’s private and public audience — Diwan-I-Khas and Diwan-I-Am — and the Pearl mosque. Emperor Shah Jahan was imprisoned at Musamman Burj by his son Aurangzeb, and was there that Shah Jahan spent the twilight of his life gazing at the Taj Mahal he had constructed for his dear wife, Mumtaj Mahal. When one climbs the steps to Musamman Burj, one can spot the Taj Mahal across the Yamuna banks. 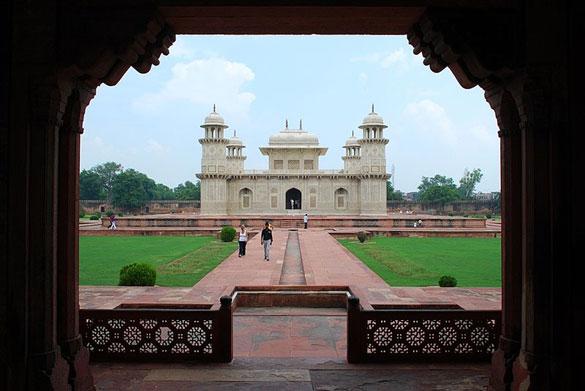 Image Source Wikipedia
Often referred to as the ‘Baby Taj’ and also as a ‘Jewel Box’, it is lavishly designed with pitra dura inlay work. It is smaller compared to several other mausoleums of the Mughal era. It has the mortal remains of Mirza Ghiyas Beg, who had been conferred the title of ‘Itmad-ud-Daulah’ meaning “Pillar of the State”. It was built by his daughter Noor Jahan who was the wife of Emperor Jahangir (1569-1627).

Where To Find The Right Paris Pub Crawl?