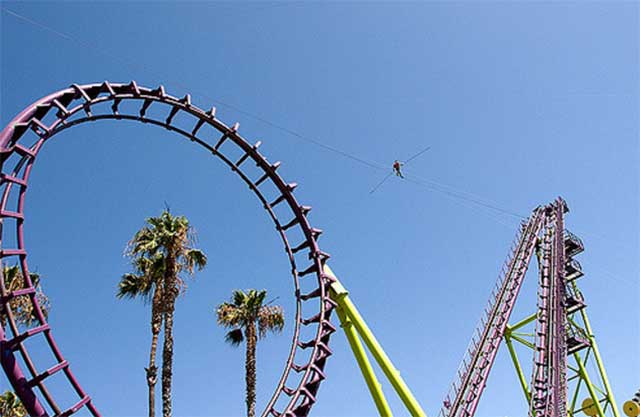 When Nik Wallenda of the Flying Wallendas performed his daredevil tightrope act by swiftly walking across a wire that was carefully strung across, between the United States and Canada, he stunned and amazed onlookers with this incredible feat. While his historic wire walk went off without a hitch, it is important to note that there are some additional heroes who made this event possible, and they are the team of incredibly talented electricians from the O’Connell Electric Company, as well as a group of skilled linemen from Syracuse, IBEW Local 1249. Without them, this daredevil adventure would have never been possible, and their efforts provided Nik with the wire he needed to complete his challenge successfully. 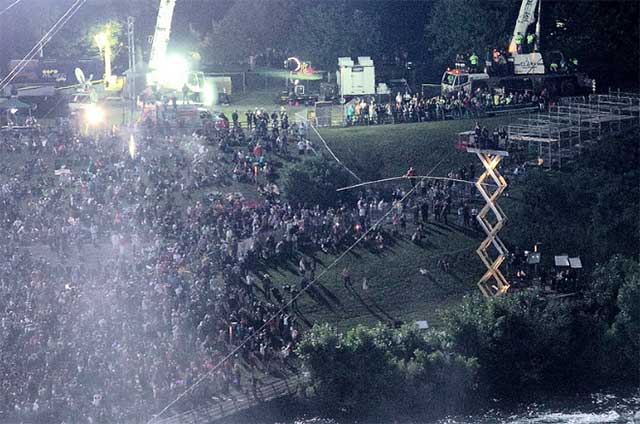 The Team
Tom Parkes, the Chief Operating Officer of O’Connell, states that when he first got the call from Nik asking for assistance with wiring his stunt, he thought it may be a joke. Randy Fletcher and Dennis Morgan, both foremen at O’Connell, agreed. Dennis states, “Randy Fletcher called me up and told me about it, and I thought it was crazy.” While the idea may have seemed crazy at first, the team soon realized that it was definitely not a joke, and got to work on this amazing project.

The job consisted of suspending and stabilizing a wire of 2-inch diameter across Horseshow Falls, an area known for high winds and blinding mists. With the wire weight being a sturdy 7.5 pounds per foot, the team knew they definitely had an interesting challenge on their hands.

The walk was scheduled to take place on a Friday night, and the team arrived a week ahead to get started. The actual planning had started 10 months prior to the event. The original spot that Nik was supposed to cross simply wasn’t dangerous enough for the daredevil, so the team had to start from scratch in a new location that proved to be scary enough for Nik. The scratching of the original plans meant that the team had to secure new equipment, as well as deviate from their original plan.

The walk started off in one country and finalized in another, meaning each and every step had to be carefully planned out based on specific weather conditions. Randy Fletcher has stated that he believes they wouldn’t have been able to successfully complete the job if it hadn’t been for the help of the IBEW contractors, proving that teamwork is everything when it comes to high risk wiring jobs. 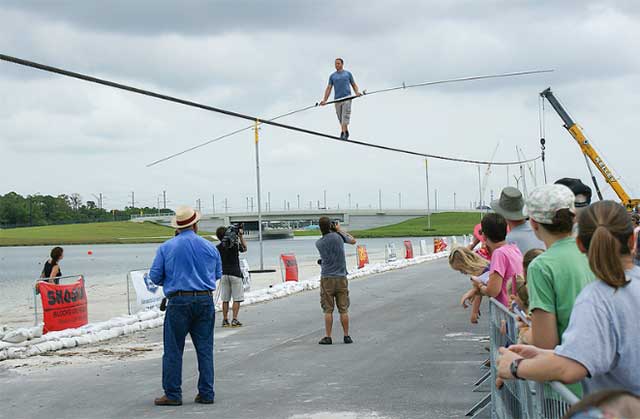 The Job
The wire was much too heavy to be lifted via helicopter over the divide, so the first step in the process was to utilize a chopper helicopter to string a heavy rope from the American side all the way over to the Canadian side. Once the rope was safely across the divide, the next step was to attach the large rope to an even larger spool, and this would allow for the rope to be easily looped back to the Canadian side of the divide. Unfortunately, turbulent winds caused the rope to snag momentarily, stopping the process and causing a bit of concern with the team. Luckily, they were able to stop the pull, and the helicopter was close enough to the American side that it was able to land safely, and the team was able to shorten the rope and move on to the next task.

Once the rope was stable, the wire pull process could begin. The guys hit another snag, however, when the returning tensions started to lift the tensioner off the ground. But the team simply faced this next challenge head on, and applied the outriggers of their trucks in order to keep the tensioner stable. The tensioner was finally stable and securely anchored to the ground on the other side, and wires were adjusted accordingly to reduce building tension. The process of the wire pull continued throughout the night, and around 3:30 AM the wire had completed its journey to the Canadian side in a safe and efficient fashion. It took an additional six hours to secure and pin the wire down successfully on Canadian soil, but, the first part of the job was complete.

The next step was to completely stabilize the path that Nik was about to venture on. This meant the team needed to move onto the wire (with the help of safety baskets) and carefully hang pipes that would in turn work to minimize the amount of bouncing and potential rolling of the wire itself. The pipes stabilized the wire and weighed it down just enough to allow Nik to begin his walk.

The Walk
Nik Wallenda had complete faith in the wiring team. He stated that it was very important to his team that they enlisted the services of a local company, which is why he reached out to O’Connell and the IBEW.

Nik originally got the idea when he was watching his family perform in Buffalo at the tender age of six. His parents brought him to the falls for sightseeing, and the idea was born. Nik comes from seven generations and 200 years of tightrope walkers, so at this point daredevil walks may simply be in his family’s DNA.

Nik began his journey across and got into a zone where he was able to ignore the harsh winds and rushing water that surrounded him on all sides. The stunt took 25 minutes in all, after over 10 months of planning and preparation. Nik wowed the crowd with his amazing agility and technique, and completed a stunt that will definitely go down in history. 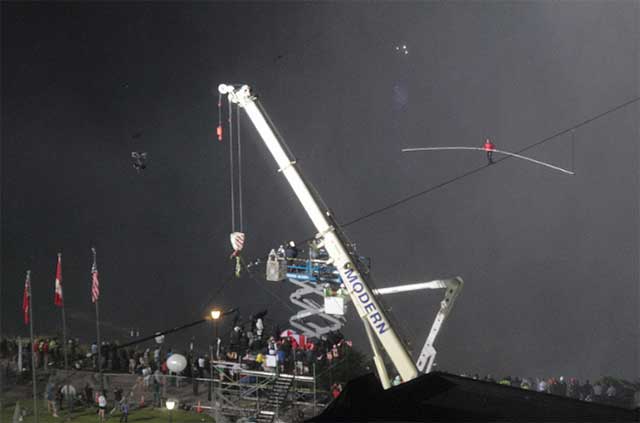 Photo Credit: Joe Gurney
Teamwork is Everything
Nik is definitely thankful to the team for helping him achieve his life-long dream, and the team got to participate in a life-changing experience. While this wiring job is certainly a step above the rest, it definitely shows that for linemen and electricians, there really is no job that is too big to handle when everyone works together as a team.

Susan Slobac has traveled throughout the world and has experienced many activities that are available. Susan Slobac refers to Electric TV to receive further information on related topics. Add Susan on Google Plus.