Taking advantage of a fresh start for 2013, many aspiring travellers decide to take things a bit easy opting for a holiday cruise; for good reason, perhaps you should consider the same. Holiday cruise packages are often no frills, no fuss in that travellers needn’t burden themselves with schedules or itineraries since these are loosely provided by the charters for your convenience. However, as an experienced traveller will know, there are some considerations to make with holiday cruises and tours and I’ve handily compiled a few of the most important for you. 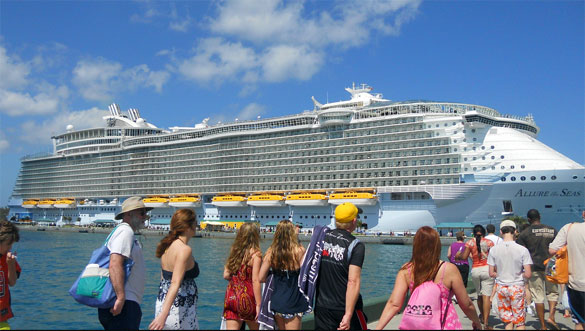 I don’t say this to frighten you but as large as cruise ships can be, a holiday in one is not for the chronically claustrophobic; at least not in theory. For the sake of your health and insurance, holiday cruise ships often come with report cards which directly refer to the ship’s cleanliness, infrastructure, hygiene and other important facts; when you get 4,000 plus people together on a boat, you’re going to want to minimise the risk of issue by limiting factors that could ruin your precious holiday.

While the whole point of a holiday cruise is taking it easy, vigilance should always be practiced as it would in any major city. This largely comes down to your instincts but you can also get practical by storing your expensive jewellery in the ship’s safe. Don’t expect drinks from strangers, especially if you’re alone and do not explore dark hallways if there appears to be a road less travelled. Having said that though, don’t let these considerations spark paranoia as the risk of incident is minimal to zero if you’re only adequately prepared.

Indulgence is to be encouraged on holiday cruises despite your 2013 resolutions, however don’t think that because you’re allergic to nuts on land that it will suddenly disappear by sea. That is to say you should obviously be careful what you eat as you delight your taste buds; indigestion is enough to ruin a great sunset. Also when on holiday it’s also tempting to tilt that bottle, but alcohol in excess will always lead to impaired judgement. While one obvious perk is you needn’t drive home, essentially cruise ships are floating buildings with all the dangers that would present.

Holiday cruise companies often provide shore excursions which could see you exploring islands in the Mediterranean like Malta or atolls in South East Asia; never miss the opportunity to take these but I’ve found it’s always best to take these in groups. No one specifically is out to get you, but lone tourists provide ample temptation for those inhabitants on shore that are used to a much lower standard of living. Be vigilant and aware, travel in groups and keep track of time; shore excursions are almost always the most exciting time on a holiday cruise so don’t let it be ruined by carelessness.

Eugene Calvini is a travel writer currently due at the Bella Vista hotel in Malta; he enjoys sharing his travel advice online with fellow avid travellers.

TOP 5 Activities You Should Try In Alaska