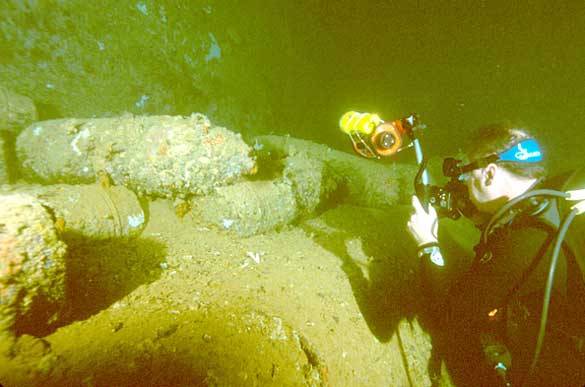 Truk Lagoon has become famous for its location as one of the world’s largest ship graveyards, courtesy of a surprise Allied attack during World War Two on one of Japan’s biggest naval bases. Today, it’s one of the world’s most popular historical dive sites for scuba divers, who can explore the remains of this legally-protected underwater museum.

The area was originally known as “Chuuk Lagoon”, but a mispronunciation led to it becoming “Truk Lagoon” instead. It is located in the central Pacific, north-east of New Guinea – officially, this sheltered lagoon forms part of the Chuuk State, which in turn belongs to the Federated States of Micronesia.

During World War Two, Japan used the lagoon as a naval base to protect its large ships as they relocated their military and strengthened the island’s defences. It was also the home base of the Imperial Japanese Navy’s Combined Fleet. The successful base became known as the Gibraltar of the Pacific, and attracted the attention of the Americans.

The two day attack, known as Operation Hailstorm, began on 17th February 1944. Over 250 Japanese aircraft were destroyed, and over 60 warships were sunk. In addition, thousands of Japanese sailors died in the bombardment, which included 5 American fleet carriers, 4 light carriers, 7 battleships and over 500 aircraft, in addition to numerous submarines, cruisers and destroyers. The US lost 25 aircraft in the attack.

As a result of Operation Hailstorm, Truk Lagoon was eliminated as a threat to Allied forces in the Central Pacific.

A Museum Under The Sea

For around 25 years, the wreckage was left untouched, for fear of setting off the bombs that were sunk along with the ships and aircraft. It’s an eerie underwater scene – tanks, bulldozers and fighter aircraft rest on the ocean bed, covered in barnacles, but mostly intact. Perfectly-preserved dishes and bottles can also be found resting amongst the ruins. Divers can swim through some of the partly-destroyed submarines and cargo ships, many of which still have their interiors intact. And, of course, the inevitable – Truk Lagoon is the final resting place for most of the Japanese casualties of the bombardment. Skulls and human bones can be found lying in between the remains of the supply ships.

Pacific Wrecks is a non-profit organisation dedicated to preserving the history of the area. Anybody who disturbs or removes any part of the wreckage will be fined, and receive possible jail time. Pacific Wrecks also warns divers that “Caustic substances like high octane aviation fuel, oils, gasoline and acid exist on many of the wrecks. Explosives, mines, munitions, detonators, torpedoes and shells are still ‘live’”.

In addition to the wreckage, the lagoon is also home to a vast and rich array of marine life – turtles, manta-rays, sharks, reef fish and rare types of coral are just some of the creatures that can be found in the area. Truk Lagoon is extremely popular with divers, who can experience both the diverse marine life and venture through the relics of the past.

According to Pacific Wrecks, “The Trukese hope to preserve their lagoon as an underwater living monument and museum of the war”.

Grace Matthews is a London-based lifestyle blogger who trusts Trade Ocean shipping agency to handle all her valuable cargo, wherever in the world it needs to go.

London-based lifestyle blogger who trusts Trade Ocean shipping agency to handle all her valuable cargo, wherever in the world it needs to go.

Travelling On The Cheap

The Top 5 Overseas Destinations For Retirees