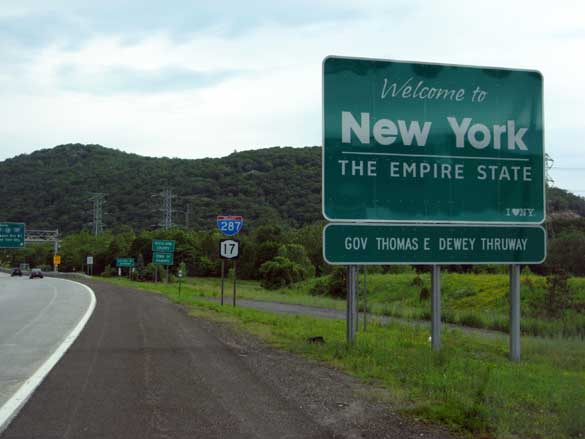 Anyone looking to relocate to New York State cannot fail to be tempted by the big apple. New York is one of the world’s greatest cities and is loved by millions for its iconic skyline, its vibrant feel, the buzz of Manhattan, the lights of the theatre, the choice of top restaurants and bars and to top it all of New Yorkers live longer than almost anyone else.

Clarkstown is consistently ranked as one of America’s safest towns and with numerous parks and green spaces to enjoy, it’s a great reason to get out and explore. Clarkstown’s proximity to the Hudson River means that there are plenty of trails to take advantage off and New York City with all its attractions is just one hour away. The town itself boasts ample leisure opportunities including catching a show at Nyack’s Elmwood Playhouse, watching a league game at Zukor Park or maybe some retail therapy at the largest shopping mall in the area.

Tucked away in the westernmost area of New York State, Amherst is just a stones thrown from Niagara Falls. The area gets around 90 inches of snowfall each year but residents see this more of a perk than a problem. Skiing, snowboarding and a winter wonderland within very easy driving distance make this a desirable place to live. Amherst is popular with retirees and empty nesters with 35% of the community being 50 years or older. Major employers here include the University of Buffalo and Kaleida Health.

For those who wish to live and work in the city then White Plains has to be high on the list. White Plains is a relatively small city boasting a low crime rate and low unemployment. Just a 35 minute train ride away from the big apple this city is understandably popular with commuters. You’ll find the ultra chic headquarters of Heineken US here as well as a whole host of corporate offices. When it comes to leisure time, White Plains can offer the resident a network of new bike paths, three golf courses and several walking trails.

Hot on the heels of White Plains has to be Saratoga Springs. This small city also enjoys low crime and a drastically lower than average unemployment rate. The town boasts at least 20 springs (the clue’s in the name) which are all available for public consumption. However, it is not just the beneficial spring water which draws people to this charming area. The lively downtown is easily walkable and includes a great choice of restaurants, shops, bars and nightlife. A solid school system and a healthy sprinkling of culture including the Saratoga Performing Arts Centre add to the attractions of this unique city.

New Rochelle is a small city which offers a diversity of different ethnic and religious communities. Situated just a half hour train ride from Grand Central Station it is an iconic suburban neighbourhood which featured in the 1960’s TV series The Dick Van Dyke Show. Property here can prove pricey but the cost is well worth it for the outstanding ocean views. Residents can enjoy stunning views of Long Island Sound direct from one of the charming waterfront parks and take advantage of the many walking trails and cycle routes in the area.

David Wilson reported on New York after visiting The Empire State for Areavibes, the expert on America’s best places.

How Do Airlines Lose So Much Luggage?

Where To Go When Visiting New York City

Taking A Trip To Manhattan