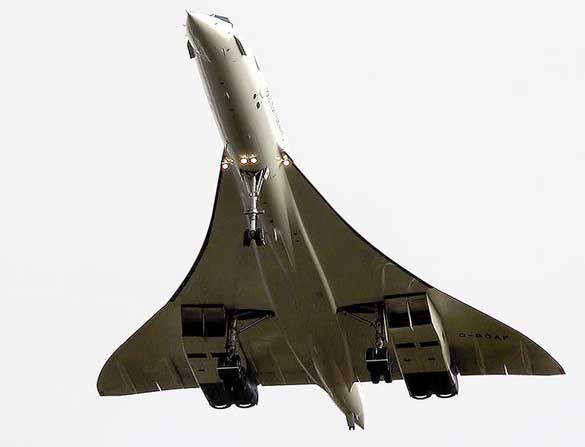 There are some machines which are so special that somehow they seem to have a character and a soul. You know they are just a piece of engineering and yet they feel like they are so much more. From an early age I was fascinated by flying and loved all aeroplanes but there was one which was very important to me and, quite unexpectedly, ended up be a big part of my life.

I was six years old and playing in my bedroom one day when my mother called me down to get ready to go out. She explained that we were going to take a quick trip out to the airport to see the first flight of a new aeroplane. As Mum had never shown any interest in aeroplanes before and was terrified of flying this trip struck me as very odd. I didn’t ask any questions and a few minutes later we were heading off. After a short drive Mum parked up on the side of the road and we stood by the car expectantly watching the sky. After a few minutes of almost total silence I began to hear a strange whooshing sound in the distance and then, seconds later, a terrifying roar. The ground around me shook violently as the strangest aircraft I had ever seen fired over my head. I was transfixed by what looked to me like a UFO and I was in awe of such immense power. It was 9 April 1969 and I was standing by the perimeter road of Filton airport in Bristol. What I had just witnessed was the maiden flight of the British Concorde.

It wasn’t until 7 years later that Concorde finally went into service. The development project had been dogged by escalating costs and the interest from potential purchasers had gradually evaporated. This was due to the small capacity, high fuel consumption and extreme noise associated with the aircraft which also suffered from having a comparatively short flying range. Matters were not helped by the lack of cargo space, the 1973 fuel crisis and the crashing of the rival Tupelev Tu-144 at a Paris air show.  Ultimately only Air France and British Airways invested in Concorde. I had watched the developing story with interest and was relieved when the plane finally went into service. I was lucky enough to see concord every so often at air shows and other events but it wasn’t often enough for my liking. All that would change in 1989.

In October 1989 I started working at Heathrow. My office was near the end of the North Runway and so if the morning Concorde was taking off to the West it would fly straight over the roof of my building. It became a daily ritual to run outside and stand in the car park to see her pass over. In any case there was no point trying to work as the noise was so immense that it was impossible to talk and we had long since warned all of our customers not to phone us at 10.50am. Concord would shake the window frames of the building, trip all of the car alarms in the car park and even shake the solid oak boardroom furniture and the machinery in the warehouse. She was such an awesome sight that I never grew tired of my morning breaks. If I worked late I could also see the 7.20pm service taking off and in the evening light you could see the afterburners flaming in the sky.

Concord was now a daily feature of my life and so 25 July 2000 was a very dark day. I was sitting at my desk when the transport manager announced that an Air France Concorde had crashed in Gonesse. I was stunned and simply could not believe what had happened. I could not have known it then but this event was actually the beginning of the end for Concorde. The planes were grounded whilst an enquiry into the causes of the crash was completed. It was determined that the accident had been caused by a burst tyre rupturing a fuel tank. The remaining planes were modified by lining their tanks with Kevlar and flights resumed late in 2001 but the writing was on the wall. The costs of flying on Concorde were so great that ticket sales had plummeted and Airbus had withdrawn its support for the maintenance of the fleet. In 2003 the BA and Air France announced that Concorde was being retired.

I was devastated by the decision to retire my beloved Concorde.  The final passenger flights took place 24 October when three Concordes returned to Heathrow and landed one after the other on a day of celebration. I stood on the roof of my office and waved them home with a tear in my eye. I thought that this was the last time the plane would fly but the following month I received a call from a friend who worked in an office overlooking the North runway. He told me to go outside because Concorde was going to take off. It turned out that there was one last flight to deliver the plane back to Filton where it had all started. I stood in my car park as the very last flight thundered over my head. I was there at the start and I was there at the end. My greatest regret is that I never got the chance to fly on Concorde and now I never will.

Sally Stacey is a keen blogger and Concorde enthusiast who writes on a variety of subjects. Check her out now on Google+

3 Road Trips You Can Take This Summer From Chicago

Park City By The Seasons